Nearby Friends is a feature on Facebook that enables users to share their current location with one another. Nearby Friends appears to be a fairly useful feature for users who don’t mind the privacy implications.

With it enabled, you’ll know where your friends are, how far away you are from them, and when they’re close to your current location, assuming they’ve enabled the feature as well.

The Nearby Feature contributes to Facebook’s goal of connecting people. Knowing friends are nearby increases the likelihood of meeting up in real life.

If you’re out for dinner and receive notifications that a couple of other friends are also dining in the same location, you may wish to locate them and share a table. 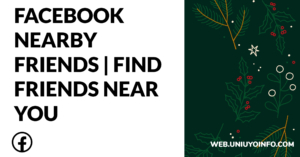 Additionally, you may receive notifications from friends who are drinking at the same bar or partying at the same club as you on a Friday night. You’d undoubtedly want to form a group and party harder.

This, in my opinion, raises privacy concerns. Who is to say that in this day and age, when crime is at an all-time high, your location information will not be used to track and harm you in some way?

Fortunately, this feature is not enabled by default and its activation is not a requirement for owning a Facebook account. Rather than that, users who find the feature useful can activate and enjoy it on their own.

If you have Facebook Nearby Friends enabled, you will see a Nearby Friends list that indicates your proximity to anyone else who has the feature enabled, in mile increments (0.5 miles, 0.7 miles, 1.8 miles).

The list also includes timestamps indicating when someone’s location was last sought. Being in large, well-known cities has an added benefit in that the neighborhood will also be displayed.

The majority of people are much more comfortable disclosing their proximity to others than their precise location at a particular time.

While connecting with people can be enjoyable, let’s not rule out awkward drop-ins by people you’re not close with or don’t want to see at the time. I shouldn’t even mention being stalked.

The final option there allows you to share your location until you manually deactivate it, as opposed to the others, which automatically deactivate after the specified time period.

Additionally, a 40-character message can be included. The message’s content could include a request for friends to send you their location. If they comply, their location will be displayed on a map.

For users who do not have the Nearby Friends feature enabled, Facebook will occasionally attempt to convince you to join the fray.

Facebook entices you with notifications such as “3 of your friends are nearby right now; turn on Nearby Friends to see who and how close they are.” That is, admittedly, somewhat enticing.

Now, let’s look at how to enable Nearby Friends.

That is all that is required to activate the Nearby Friends feature.

If you try out a feature and decide it’s not for you, you can always turn it off. To accomplish this, follow the steps below;

As previously stated, navigate to Nearby Friends (scroll up and read through if you have to.)

A message will appear to inform you that Facebook will continue to harvest your location history. If you’re not comfortable with it, you can opt out by following the steps below.

This satisfies all requirements. However, the previously harvested history log is preserved.

TEENS AND NEARBY FRIENDS

This is an excellent opportunity for parents of teens who use Facebook to check their Friends lists. Teenagers have a higher likelihood of having a huge number of Facebook friends. Their friend list is more likely to be a bunch of “random acquaintances.” They might be exposing their location to countless people. If they aren’t careful about adding friends, they may be revealing their location to a wider audience than you’d want (or they even realize).

Again, this is an optional feature, so discuss with your teenager whether or not they should be using it if they have Facebook installed on their smartphone. If they do, it could be a good idea to restrict the sharing to “Close Friends.”

Nearby Friends is a popular Fb feature that lets you know who is close by amongst your friends so you can quickly arrange to meet. However, it depends on the privacy settings of each Facebook user, the feature can be activated or removed for anyone who uses the Facebook app.